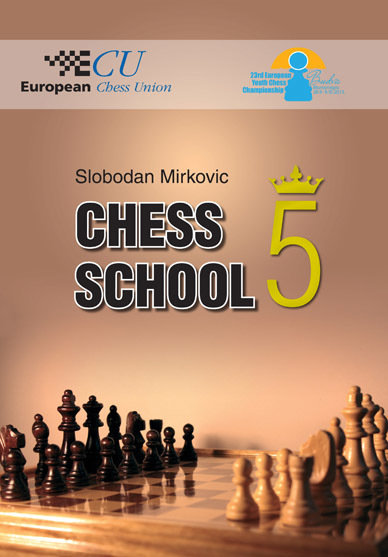 "Chess School" project consists of five books and the book which the readers have before them is the last one in the series.

Like the previous books, Chess school 5 consists of three parts.

The first part deals with queen endings. The system of work and studying of this type of endings are explained, the basic principles and game plans are laid out. Some analyses and evaluations of critical positions often cited in chess literature have been corrected in a number of places.

The third part contains strategic motifs. In this part of the book we talk about improvement in the initial phase of the game – in the opening. In a variant of Caro-Kann defence we highlight the unbreakable tie between the opening and the ending. Particular attention is devoted to typical strategic lines in the said opening. We laid out the basic principles and game plans in this type of ending based on examples from practice. We explain that the starting point in studying an opening lies in studying the typical endings in that opening.

The book "Chess School 5" continues the cooperation with the organizers of European Youth Chess Championships Budva 2013, which makes the author particularly happy.

The wheel which has not stopped turning (instead of foreword)

How to do endings?

The role of the coach

Pushing the king back

1. Pushing the king of the weaker side back is carried out with queen.

2. Pushing the weaker side’s king back is realized with harmonized activity of king
and queen.

Queen versus one pawn

• The critical square is inaccessible to the queen

Queen and a pawn versus queen

1. Pin along a diagonal

Cases with g (b) pawn

Queen and two pawns versus queen

B) pawns are isolated

Queen and three or more pawns versus queen

Unfavourable positions of pieces and pawns of the stronger side

1. The stronger side has or can create an advanced passed pawn

2. Stronger side has or can create a passed pawn in the centre or on king’s si