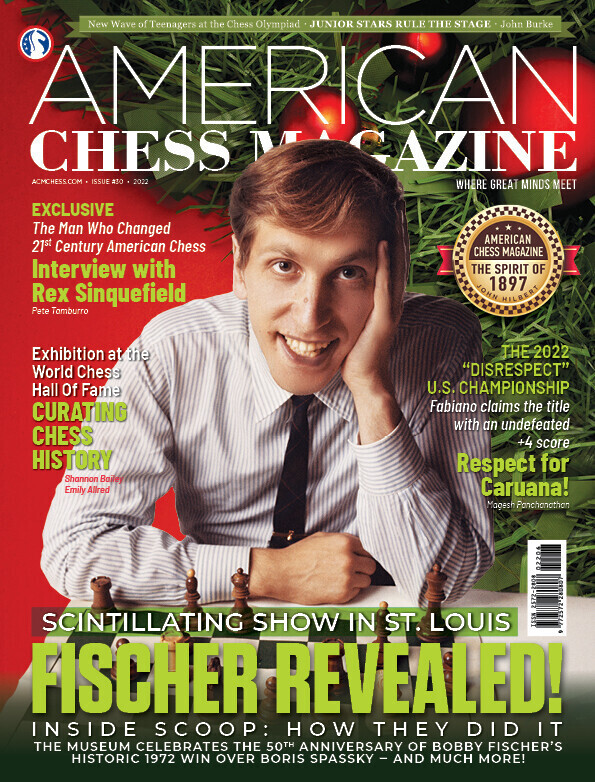 In connection with their scintillating show 1972 Fischer/Spassky: The Match, Its Origin, and Influence, currently on display at the World Chess Hall of Fame in Saint Louis, the curators provide ACM readers with the inside story of how they assembled this gigantic (R)exhibition!!

The 50th anniversary of the 1972 World Championship match played in Reykjavik between American Bobby Fischer, and Soviet Boris Spassky has been celebrated all over the world, including the U.S. chess capital – Saint Louis – where the World Chess Hall of Fame has put on a huge display to commemorate the occasion. Now, exclusively for American Chess Magazine, the curators – Shannon Bailey and Emily Allred – reveal the creativity that went into constructing the exhibition, thus enabling our readers to enjoy a peak into the artifacts on display in the three-story premises of WCHOF. Then, to add icing to the cake, we present a couple of historical essays on Boris Spassky and Bobby Fischer by top-class U.S. chess authors GM Andy Soltis and IM John Donaldson, respectively.

The pillar behind all the ideas and wonderful achievements by the staff of the WCHOF and the Saint Louis Chess Club is the generous support of the Sinquefield family. Now, in an exclusive interview given to ACM Senior Editor Pete Tamburro, Rex Sinquefield explains how his passion for chess led him to establish a chess club, helping children to gain access to the royal game while linking it to education, art and history – thereby eventually raising the overall cultural level in Saint Louis under the tutelage of his professional staff.

Also in St Louis, U.S. chess fans will surely long remember the eagerly awaited so-called “Disrespect U.S. Championship.” What occurred on-the-board is thoroughly analyzed here in an article by GM Magesh Panchanathan, who, however, also covers certain controversial off-the-board happenings. This is followed by GM Sarunas Sulskis’ deep annotations to two more highly interesting encounters from the men’s tournament, together with a magnificent final-round encounter from the women’s event.

GM John Burke then shines the spotlight on the new generation of young players who seem to be ready to take over the main stage of world chess. John has selected seven teenage grandmasters with FIDE ratings above or very close to 2700 – Nodirbek Abdusattorov and Nodirbek Yakubboev from Uzbekistan, Dommaraju Gukesh, Arjun Erigaisi, Nihal Sarin and Rameshbabu Praggnanandhaa from India, and Vincent Keymer from Germany. Their recent results clearly illustrate their potential – which was confirmed further at the 2022 Chess Olympiad held in Chennai this summer, where their respective rating performances rose from 2766 to a stunning 2867!

Since we have recently published a reprint of the June 1897 American Chess Magazine, we asked a renowned U.S. chess historian to take us back in time when our great predecessor was born. In beautiful style, John S. Hilbert describes the challenges and developments experienced by our “grandfather,” which unfortunately led to a not very happy ending. Nevertheless, it is certain that in its day the original American Chess Magazine provided a very significant record of chess in the USA, and we proudly celebrate the 125th anniversary of its first issue.

One of the most popular chess openings, the Queen’s Gambit Declined, gained its popularity due to a specific pawn structure – often recognized throughout the chess community as “the Carlsbad.” Patrick McCartney takes us on a journey to a picturesque spa city in the Czech Republic so as to explain when and why the name was assigned to this famous chess opening. Furthermore, through a variety of games and a number of decades, Patrick explains basic plans for both sides along the way.

ACM endgame expert GM Alex Fishbein continues in educational style by tackling the eternal struggle of a bishop versus a knight. While diligently explaining the major schemes in this type of endgame, Alex presents many highly instructive examples from games played by great players of yesteryear, as well as those by today’s elite – eventually sealing the deal with an almost paradoxical endgame from the 2022 World Junior Championship.

As usual, GM Jacob Aagaard presents a set of fresh examples for chess training, Jon Edwards delivers a personal retrospective on the advance of chess technology, and GM Nikola Nestorovic dissects two amazing recent top-level games that caught his eye. FM Carsten Hansen reviews another ten newly published chess books, while FM Grayson Rorrer documents significant tournaments played both in the U.S. and abroad. Our guest speaker in 5x5 Q&A is the legendary English GM Raymond Keene OBE, a very versatile chess personality and one of the most prolific chess authors of all time.

Since this issue is expected to hit doorways over the Christmas and New Year holiday period, to conclude, we wanted to raise a few smiles by including some amusing, if unfortunate, chess quotes specially prepared by Pete Tamburro.