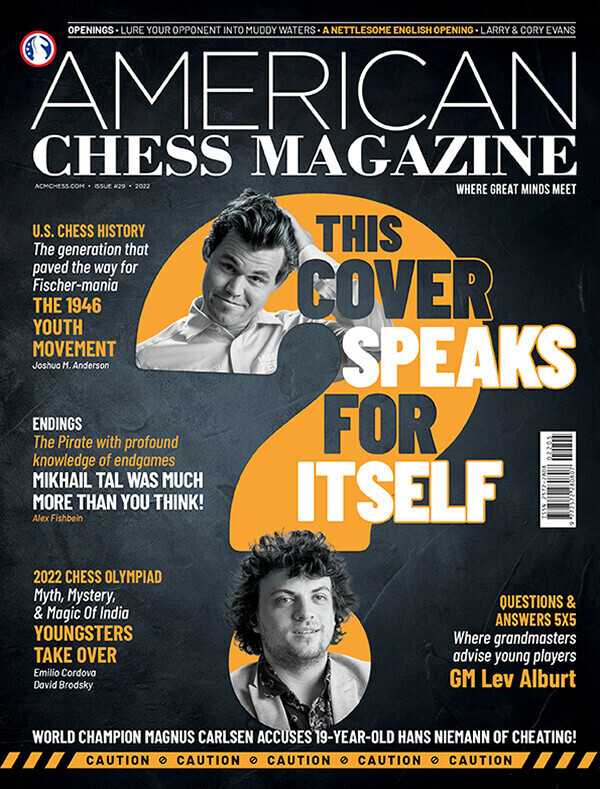 AMERICAN CHESS MAGAZINE 29 - This Cover Speaks for Itself

AMERICAN CHESS MAGAZINE 29 - This Cover Speaks for Itself

At the end of September, World Champion Magnus Carlsen openly accused 19-year-old American GM Hans Niemann of cheating, a sensational charge which has developed into one of the biggest-ever scandals in the world of chess!

Prior to delivering his public statement, Carlsen had only made a silent protest by promptly withdrawing from the Sinquefield Cup, after losing his game against Niemann – who has recently displayed an extraordinarily rapid rise in world chess rating. Nevertheless, the affair has been followed by plenty of rumors and innuendo, although with no clear evidence of any over-the-board cheating. ACM Senior Editor, Pete Tamburro offers his two cents on the matter, with clear views on proper adult behavior, while new Correspondence Chess World Champion, Jon Edwards, dissects the notorious Carlsen vs. Niemann game with the help of tools usually reserved for his chess analysis.

It was difficult to imagine that the USA, fielding one of the strongest national Olympic teams ever, would finish this year’s Chess Olympiad off the podium. Peruvian Board 1, GM Emilio Cordova, shares his own achievements from the most prominent chess festival in the world, explaining why this Olympiad will be remembered for so many unexpected happenings on so many different levels. Newly qualified GM, David Brodsky, then sums up the respective performances of those who represented the men’s and women’s U.S. teams in Chennai, while GM Sarunas Sulskis annotates three thrilling encounters from the Olympiad that caught his eye.

The President of Chess Journalists of America and a renowned chess historian, Joshua Anderson, sheds light on one of the most significant junior generations in the history of U.S. chess, returning the reader to the early post-World War II years. Then back to the present day, NM Grayson Rorrer concludes the report that he started in ACM #28 on the latest U.S. Junior Championships, this time covering the Girls’ tournament which was even more exciting and unpredictable in terms of the final result than the boys’ event. First-hand insights are also shared by co-winner Sophie Morris-Suzuki who annotates an essential game from her early winning streak.

ACM endgame expert, GM Alex Fishbein, this time presents examples of lesser-known creativity from another legendary chess player – the eighth world champion Mikhail Tal. All those who remember Tal only for his ingenious middlegame combinations will be surprised to learn that he also possessed supreme endgame knowledge characterized by brutal precision, which formed a pillar for making correct assessments before unleashing tactical solutions.

IM Larry Evans and his son NM Cory have explored a “quiet” opening line which eventually led them to a plethora of nettlesome positions. Exclusively for ACM they share their analysis and explain the concept of nettlesome openings along the way. A study of their findings is highly recommended, and they conclude it with the statement – “the main line ends in dynamic unclear equality.”

Back in May, we received the sad news of Allan Savage’s passing. A passionate chess master, teacher, author, journalist, and collector from Maryland, Allan was not only our subscriber and supporter from the get-go but was also a deeply respected member of the American chess community. Thanks to his family and friends, ACM prepared a decent farewell obituary for this extraordinary man who devoted his life to chess.

Our 100 pages are often insufficient to include all the material we would like to publish. Thus we invite a reader to enjoy going through some more tense battles from the highly competitive Ontario Open. Further domestic coverage comes from ACM Features Editor, NM Grayson Rorrer who documents significant tournaments played in the U.S. – and also abroad! – accompanied by his comments.

This is followed by FM Carsten Hansen’s regular reviews of ten newly published chess books and our 5x5 column where the guest speaker is the legendary GM Lev Alburt, who offers concrete advice for novice and young chess players.