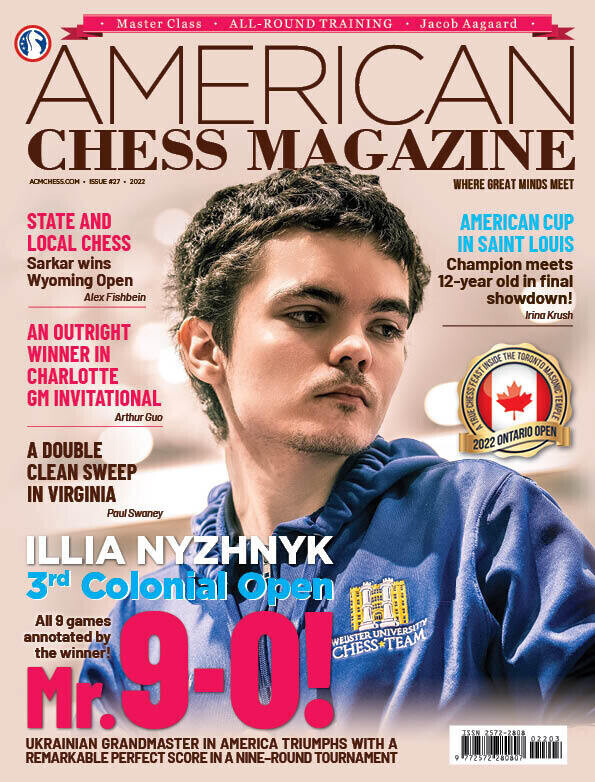 Ukrainian grandmaster living in America, Illia Nyzhnyk, triumphs with a remarkable perfect score in the nine-round Colonial Open in Virginia! All nine games are here annotated by the winner.

Although he has been playing chess for almost two decades, GM Illia Nyzhnyk recently made his first perfect score in a nine-round tournament, delivering his first ever checkmate with a pawn along the way! In Illia’s well-known style, always with a strong sense of objectivity, American Chess Magazine is proud to present a first-hand report on this humble young man’s outstanding achievement – accompanied by a short interview.

With equal pride, we value highly a huge effort by Paul Swaney, an energetic chess enthusiast from Virginia, who has put together a fantastic report on the Colonial Open – linking players, their exciting games, annotations, and impressions, with passionate organizers who provided excellent conditions for all the participants. Moreover, this bonanza is enriched with Paul’s own photos taken at the tournament.

Then again, our first ever article on chess in Canada is brought by another great chess enthusiast, George Supol. George and his team were faced with numerous challenges when organizing the Ontario Open in Toronto, yet it turned out to be an exceptionally memorable tournament for all the participants. In an extensive report are featured plenty of happenings both on and off the board, bearing witness to enormous dedication in all aspects of the game and its organization. This inspiring report will hopefully serve as an encouragement for more contributions from north of the border.

When it comes to memorable events, GM Alex Fishbein shares his recollections of one of his own which saw him travel all the way to Wyoming – back to where he is officially documented as being the first chess grandmaster from this state! In a nostalgic local story, Alex shares his personal reminiscences as well as annotations to some thrilling games.

GM Irina Krush has added another record to her long list of special achievements by winning the inaugural Women’s American Cup in Saint Louis. In addition to her own look-back on her triumph, Irina directs the spotlight on 12-year-old rising star Alice Lee – once Irina’s big fan and now a sporting rival in the final decisive match of the event.

More on women’s chess follows in an article by WIM Dr. Alexey Root in which she showcases two ladies who can truly be described as “chess travelers.” Exploring their personal experiences certainly shows just how much excitement the game of chess can offer.

The focus of American Chess Magazine on junior chess remains constant. This time we follow another attempt by 15-year-old IM Arthur Guo to gain the GM title. An uncompromising fighter that he is, Arthur was able to win a strong invitational tournament in Charlotte, although the desired norm remained just out of his reach.

Speaking of juniors, we are proud to welcome on board our new Features Editor, NM Grayson Rorrer, who reviews significant tournaments played both in the U.S. and abroad, while highlighting individual quests for norms and titles.

From times gone by, we present a highly interesting article from 1929 which relates to the value of a mathematical mind in playing chess. Then, for those who enjoy chess tales, Alexis Levitin offers another piece of extraordinary writing in which he describes personal links between chess and table tennis.

As is his custom, GM Jacob Aagaard offers a selection of fresh examples suitable for training, whereas our endgame expert GM Alex Fishbein explains the importance of handling pawn structures through examples of games taken from different eras and styles.