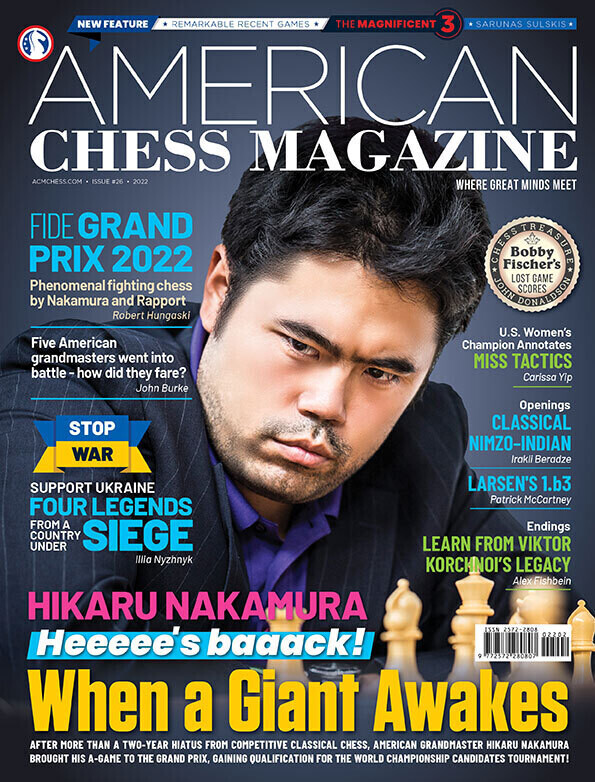 After more than a two-year hiatus from competitive classical chess, American grandmaster Hikaru Nakamura brought his A-game to the FIDE Grand Prix, gaining qualification for the World Championship Candidates Tournament!

From February to April, the main focus of the worldwide chess community was directed on the FIDE Grand Prix series. Here American grandmaster Hikaru Nakamura was able to demonstrate top-class play, amazing resourcefulness, and mental stamina to run the gauntlet and emerge as the overall winner, thereby joining Fabiano Caruana as a second U.S. candidate for the World Championship. In this issue, Hikaru’s contemporary, GM Robert Hungaski, presents his personal choice of the Grand Prix winner’s most notable games from the series, supplemented by a couple of games by another candidate’s qualifier Hungarian GM Richard Rapport.

On the same topic, GM John Burke looks at the individual performances of all five U.S. representatives who competed in Berlin and Belgrade. True to his style, John has done a wonderful job in directing the spotlight on key games played by each of the five grandmasters, summing up their individual results and guiding readers through the highlights of all three tournaments.

Ukraine is a chess powerhouse and its many strong players have found themselves locked in a war zone. So GM Illia Nyzhnyk, a U.S. resident born and raised in Ukraine, annotates a selection of games played by four Ukrainian living chess legends – Ivanchuk, Beliavsky, Romanishin, and Mikhalchishin. The presented games are true gems that beautifully illustrate the creativity of this quartet of highly talented grandmasters.

With great pleasure, we welcome to our pages new authors and their approach to chess. 18-year-old Carissa Yip recently won the 2021 U.S. Women’s Chess Championship, while not only having had to deal with strong opposition across the board but also with her school homework. The conscientious student that she is, Carissa, exclusively for ACM, made time to share her insights into how she won her first national title – a contribution that was greatly appreciated.

By contrast, in her regular column on female chess, Dr. Alexey Root goes back in time to showcase a far older U.S. women’s chess champion!

Another new ACM author in this issue is IM Irakli Beradze, who has undertaken extensive analysis on a very topical variation of the Classical Nimzo-Indian Defense, which has the reputation of being an easy way to equalize for Black.

Then, Lithuanian grandmaster, Sarunas Sulskis starts a new column “The Magnificent 3” in which he dissects three highly interesting recent games with all their thrills and spills.

In ACM issue #22, we put on display a number of valuable artifacts related to Bobby Fischer, which were unearthed from the vaults of the Marshall Chess Club in New York. Respected historian IM John Donaldson reveals even more on the background to these chess treasures.

As usual, GM Jacob Aagaard offers a selection of fresh examples suitable for training, Patrick McCartney takes us on a journey through the history of Larsen’s Opening, while our endgame expert GM Alex Fishbein handles the legacy of Viktor “The Terrible” Korchnoi.