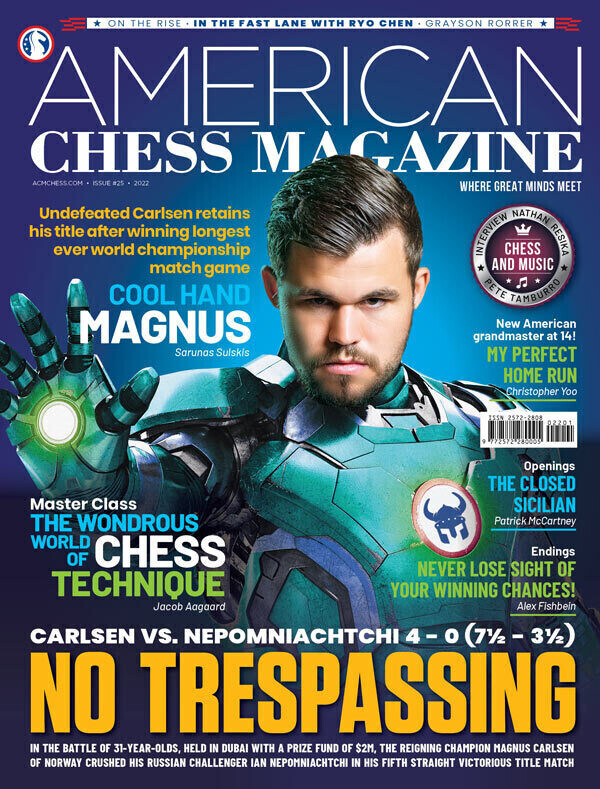 After winning the longest ever world championship match game, Magnus Carlsen retains his title, having crushed his Russian challenger Ian Nepomniachtchi by 4–0 (7½–3½) in his fifth straight victorious title match.

An extensive report on the Dubai world title match is delivered by a gifted writer, GM Sarunas Sulskis, who provides readers with his unique perspective on the real-life battle tensions that arose over the board there. His thorough analysis of the key games, as well as his views on various other developments in this encounter, are supported by a presentation of readers' pre-match expectations and their predictions as to the longevity of Carlsen's invincibility in defending his title.

GM Jacob Aagaard has put together a rather different masterclass lecture from what has previously been his customary “all-round training” approach. This time he highlights key moments that attracted his attention from one of the strongest open tournaments played in 2021 – the FIDE Grand Swiss in Riga. His well-chosen games by the top finishers are thoroughly dissected, which is another important difference from what we have been used to in Jacob’s previous columns in ACM.

The U.S. juniors are constantly improving and so ACM continues to report on their successful performances. A newly minted GM Christopher Yoo shares an introspective look-back on his path to gaining the highest chess title – before turning 15! In addition, NM Grayson Rorrer presents a pre-teenage hero on the rise, 11-year-old Ryo Chen, who gave notice of his exceptional chess talent by recently gaining his first IM norm.

In her new regular column on women's chess, Dr. Alexey Root features the top female finisher at the 2021 U.S. Open, Kameliia Sharuda, a chess mum, coach, and a player who admits there is little to compare with the excitement of competing in chess.

The U.S. collegiate chess scene has been attracting a large number of strong players, making their team competition one of the strongest events in the annual calendar. Winning the prestigious title of best chess university in the U.S. three times in a row is an outstanding feat. In his report on the 2021 Final Four tournament, the champion's head coach GM Alex Mista presents a generation of international players who have brought fame to the University of Texas Rio Grande Valley.

Our Senior Editor Pete Tamburro recounts a long conversation he had with an extraordinary artist who is also part of the chess-playing community – FM Nathan Resika, a star-spangled opera singer and performer. Nathan shares his life experiences on both the stage of musical theatre and over the chessboard, drawing interesting comparisons between the two. In addition, we present Nathan's most memorable chessboard victories against highly regarded titled opponents.

Patrick McCartney takes us on a journey through the history of the Closed Sicilian Defense, an opening system that was once a strong weapon in the hands of several world champions. Then GM Alex Fishbein delivers a highly instructive lecture on how to remain focused and alert regardless of the position on the board and never to lose sight of possible winning chances.

In his customary vibrant narrative, English Professor and avid chess aficionado Alexis Levitin tell a story of addiction to pattern fixation, which can be brought on by dedicating one's brain totally to competitive chess.

Issue #25 closes with SIM Jon Edwards highlighting the impact of technology on chess endgame literature, and then revealing how impressed he was with a newly released chess engine. As usual, FM Carsten Hansen reviews a personal selection of ten newly published chess books, while this time our guest in the 5x5 Q&A section is German GM Raj Tishbierek, who advises young players to devote time to chess without getting hooked on it!