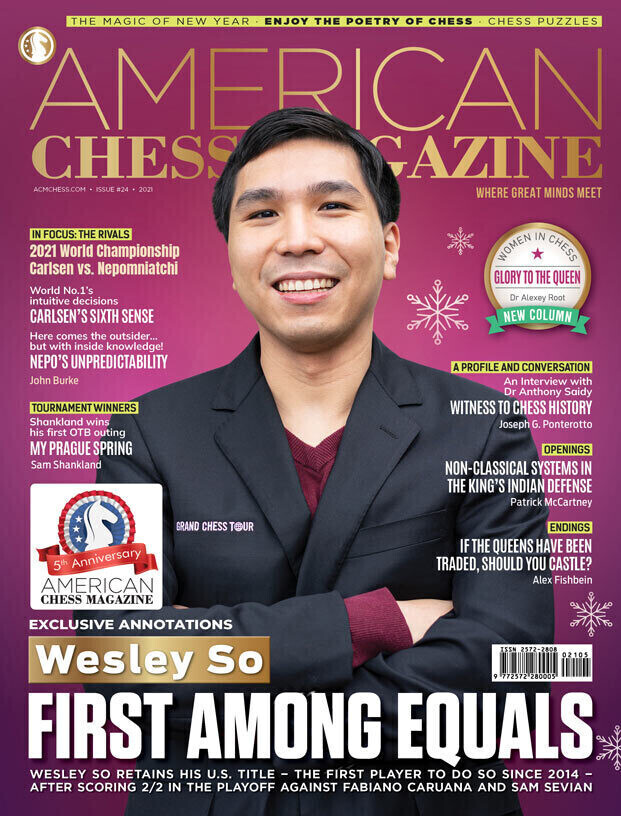 Wesley So retains his U.S. title – the first player to do so since 2014 – after scoring 2/2 in the playoff against Fabiano Caruana and Sam Sevian.

Despite the pandemic, GM Wesley So’s results in the past year have been fantastic with back-to-back national championship titles and overall victory in the 2021 Grand Chess Tour confirming his well-known solidity and endurance. In view of this, we think that Wesley fully deserves to shine on the front cover of ACM #24. Exclusively for ACM, Wesley has chosen to annotate two important wins on the way to claiming his third U.S. Championship, explaining on-the-board happenings in detail and sharing his personal feelings during these games and the tournament in general.

Another U.S. player whose form has been on the rise since the chess world opened up for live tournaments is undoubtedly GM Sam Shankland, who provides us with a first-hand account of how this all started with his convincing win at the elite Prague Masters. True to his own style, Sam’s analytical presentation includes constant introspection, but above all a high level of objectivity laced with humorous episodes, all of which will not only serve as invaluable advice to readers but also raise a few smiles!

In a preview of the 2021 world championship match, GM John Burke gives his personal views on Carlsen’s fantastic intuitive decisions, as well as Nepomniachtchi’s unpredictability. In the same context GM Jacob Aagaard challenges readers with interesting exercises drawn from earlier clashes between these two peers.

Significant persons who have left an indelible mark on the American chess scene are always highly welcome in ACM. This time around, our guest is IM, Dr. Anthony Saidy, who played a significant role and witnessed some important events in U.S. chess history from the not too distant past.

GM Alex Fishbein delivers another valuable endgame lesson, giving reasons pro et contra for castling in queenless positions. Then, when it comes to openings, CM Patrick McCartney concludes his research on the history of non-classical systems in the King’s Indian Defense.

As usual, Jon Edwards provides coverage of the latest Chess Tech developments, this time dealing with the use of chess engines and presenting Fritz 18 – a new “player” in this rapidly-advancing field of chess analytics.

In his beautiful narrative, English Professor and an avid chess aficionado Alexis Levitin reminiscences on his first live meeting with a great chess player – GM William Lombardy, who had a quite unusual reply to a simple question.

Issue #24 celebrates the fifth anniversary of the American Chess Magazine. To mark this occasion, our editors and readers give their own impressions of how we started and where we stand at this moment. Moreover, our special way of paying tribute to our early supporters from way back in 2016 is expressed through a “Hall of Fame” roll of honour of our very first subscribers who helped us on the way in this exciting journey.

With the approach of Christmas and New Year’s holidays, we have prepared a set of amusing chess puzzles for readers to solve, while FM Carsten Hansen reviews ten newly published chess books.

Last but not least, our special guest in 5x5 Questions and Answers is GM Alex Colovic – three-time participant in Chess Olympiads, renowned chess coach, blogger and writer, President of Association of Chess Professionals, fluent in seven languages, and a versatile chess personality. His answers will certainly be appreciated by many, and he concludes by recommending chess to youngsters: “Thanks to chess I have visited a lot of countries, made friends all over the planet and I feel like a citizen of the world. If you love the game, then this is a pretty exciting way to make a living.”