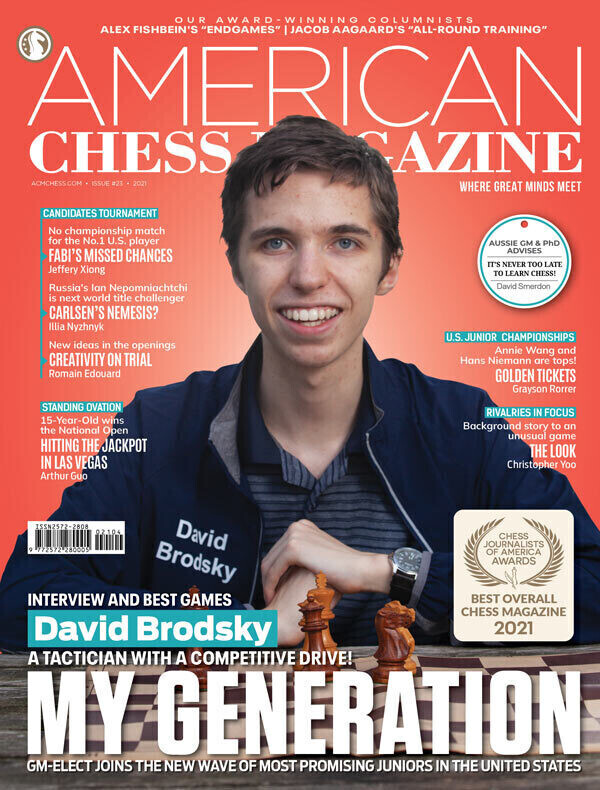 The latest ACM focuses not only on the World Championship Candidates tournament but also on young American players, which is very timely in view of the U.S. Championship where Wesley So – a “veteran” at the age of 28 – won the title but only after a three-way rapidplay tie-breaker with grandmasters Fabiano Caruana and 20-year-old Sam Sevian.

But there is currently a new wave of even younger American grandmasters and grandmasters-to-be, as evidenced by many recent successes of players in their teens. In fact, our coverage of the U.S. Junior Championships has been placed in the capable hands of a highly talented 14-year-old US National Master!

With Carissa Yip, aged 18, winning the Women’s U.S. Championship, 2021 has indeed been a very good year for American teenagers.

So who will be the successors to the present-day U.S. chess elite and how far have they advanced so far? This is the question that we have tried to answer in this issue.

The young man portrayed on the cover is a 19-year-old GM-elect David Brodsky – one representative of this new generation of up-and-coming U.S. chess hopefuls.

Similar to GM Brandon Jacobson (who we featured in ACM #17), David is not only strong in chess but also talented in maths and computer science. As he may not have been given as much recognition as he deserves, during the lockdown, we conducted an interview with him – to which he has added some games which best illustrate his playing style and current level of play.

In line with our accent on youth, extensive reports with annotations of the most notable games and fragments from both the U.S. 2021 Junior and Junior Girls’ Championships are brought by NM Grayson Rorrer. In addition, we present a story following a rather unusual occurrence in the Boys’ section with annotations and an introspective look by one of the protagonists – 15-year-old IM Christopher Yoo.

Yet another 15-year-old has surprised chess fans all over the country by winning the National Open ahead of 50 GMs and IMs! This is IM Arthur Guo and readers can familiarize themselves with Arthur’s play by reading his own account of how he won such a strong event.

We also introduce you to the TD of this record-breaking National Open, Alan Losoff, who shares his own views on factors that helped his team to achieve another milestone by organizing the famous Las Vegas event despite the Covid crisis.

On a different note, for all parents who rarely accompany their kids to major events like the National Open, a father’s true story will surely make interesting and enlightening reading.

Although he has now outgrown his junior under-20 status, GM Jeffery Xiong certainly belongs to the “new wave” of the U.S. top players. In this issue, Jeffery shares his views and game analysis of Fabiano Caruana’s missed chances in the second leg of the 2020/2021 FIDE Candidates tournament. A detailed overview of the whole event is then presented by GM Illia Nyzhnyk, while GM Romain Edouard reports on the opening surprises sprung by the participants and the failures they sometimes experienced. Then, as a postscript, our regular columnist GM Jacob Aagaard analyses some interesting positions from less prominent games played in Ekaterinburg.

Side by side with the juniors, Saint Louis hosted the U.S. Senior Championship and in his regular column GM Alex Fishbein, who took part in this event himself, directs the spotlight on the endgame play of older generations. There are good reasons why these players have become legends of U.S. chess.

The sad news of the passing of supreme U.S. chess editor Glenn Petersen reached us in mid-August, and if there is one person who can offer fond memories of Glenn’s engaging personality and considerable achievements, then it is ACM Senior Editor, Pete Tamburro, who was Glenn’s friend and close associate for over half a century.

On a positive note, we were thrilled to learn that American Chess Magazine has received an array of accolades by the Association of Chess Journalists of America (CJA), including its annual award for “Best Overall Print Magazine”.

Last but not least, a six-time Chess Olympiad participant and Ph.D. in economics, Australian GM David Smerdon, is our special guest in 5x5 Questions and Answers. His bold advice that “it’s never too late to learn chess” will be certainly appreciated by many fans of our game, just as we hope his other answers will, too.